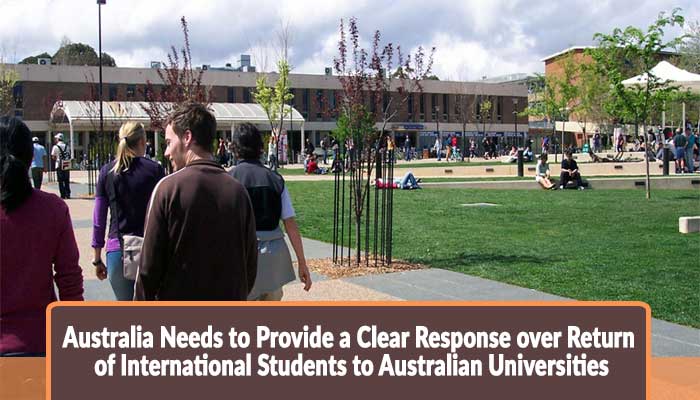 International students are feeling continuous frustration and anxiety as they are being locked out of Australia due to Covid-19 border restrictions. A lack of proper of a prompt and clear message from the top Governmental authorities regarding the return of international students to Australian universities is a major disappointment for the students. Even online campaigns have not been beneficial to get a proper timeline over students’ return. So all this is leading to one asking Has Australia failed its international students who are feeling stranded due to lack of guideline?

Rising disappointments are not only due to the closure of Australian border but due to the lack of a clear message from the Australian Government officials over their return to Australia, as The Lygon Group head of research Angela Lehmann said in a statement that,

“What has caused the most anxiety and, at times, anger towards the Australian government is not necessarily about the border closures per se, but about a lack of clear messaging, a lack of timelines and a lack of positive communication from the federal government about the importance of welcoming students back onshore,”

Lehmann said in the interview that although State governments are trying to be in proper touch with the students and providing them with all the basic information they need regarding their return, but it is the silence of the federal Government as many international students are looking forward to a proper announcement from them, which unfortunately is not happening.

She said that, “These students stranded offshore are watching the news from the Australian government incredibly closely — their lives and their plans depend on it! So everything that is said by the top politicians in our country is heard by these students. Indeed, everything that is not said by these people is heard even louder, When the prime minister or the minister for immigration do not mention international students when discussing border reopening and re-iterate instead that returning Aussies are the priority, our stranded students hear a message of neglect, of not being welcome, and even further, of being important purely for money — a ‘cash cow’, if you will.”

Last year soon after the declaration of life threatening Covid-19 as a global pandemic, Australia closed its borders for all non-residents and non-citizens on March 20,2020. After hearing nothing from the official for a long time international students took their matter to twitter to draw some attention on the issue, and to highlight their desire to return to Australia and resume their studies on campus. Students have confessed that due to this lack of response this whole situation has started to take a toll on their mental health.

Students feel anxious because their dreams of enjoying an international education while enjoying the amazing Australian life are being snubbed. Lehmann told that ““Influencing border reopening is a very difficult aim for a student campaign. However, what is more achievable is lobbying for frameworks, for better communication and for clear information.”

What is the Australian officials’ take on this?

The Australian officials have spoken about it, as the Immigration Minister Alex Hawk said that Australian government is working to reopen the borders for international students.

Lehmann believes that how the Australian Government is responding to this whole matter can tarnish its reputation globally. As due to this situation many disappointed students have decided to study in other countries like UK and Canada, as not all students are willing to put their future on hold.

However she also believes that once this pandemic gets under control Australian universities can experience a normal study life.

She said that, “I do agree that Australian universities will need to work harder than their competitors to entice students back once the borders reopen. However, I do also believe that we will have a strong competitive advantage in delivering on a COVID-safe environment once vaccinations are widespread and borders reopen. The work we do now, though – prior to that moment – is going to be key to that recovery.”