Foreign students are not permitted to enter Ontario, Canada, in order to control the growing number of Covid-19 cases in the province 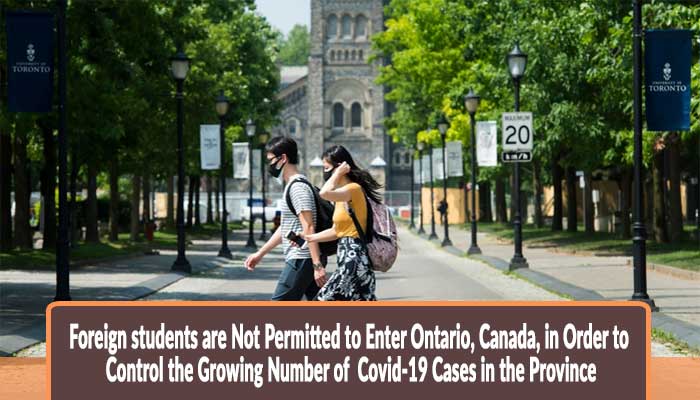 The devastating third wave of the Corona virus has struck various parts of Canada, with Ontario province bearing the brunt of the toll. As a result, in order to combat the growing number of Covid-19 cases in Ontario, the Canadian government has decided to suspend entry of all foreign students in the province.

In a statement the Prime Minister of Canada, Justin Trudeau said that “Premier Ford asked that we suspend the arrival of international students. Because, at this time, Ontario is the only province requesting this, we’re happy to work more narrowly with them.”

“My office is currently working with Premier Ford’s offices and the authorities in Ontario to do a follow-up to make sure this approach is formalized.” He added.

However, a source from Premier Doug Ford later confirmed that no such proposal had been made to the Government. “We have not made a formal request to ban international students, but look forward to the federal government providing solutions to reduce the importation of cases and introduction of variants into Canada.” Said Ivana Yelich, media relations director for Mr. Ford, in a statement.

In a statement Mr. Ford also raised concerns regarding the situation of Covid-19 in Ontario. He told the media that if he were to do something, he would immediately close Pearson Airport and close all land crossings except those that are completely necessary, all to avoid the arrival of vaccine-resistant variants that might spark a fourth wave.

However, after the news regarding the ban on international students in Ontario surfaced Linda Franklin, president of Colleges Ontario came forward and reassured the authorities that in order to protect the health of international students and to avoid the dissemination of COVID-19, the educational institutes as well as universities of Ontario have “strong Covid-19 protection measures” in effect.

“We would urge the governments to avoid any unnecessary measures that could hurt our ability to attract students to Ontario. It is essential that we produce as many qualified graduates as possible to help drive Ontario’s economic recovery.” She said.

“Ontario universities have robust policies and procedures in place to ensure that students from outside Canada can arrive safely” said Steve Orsini, president of the Council of Ontario Universities, in an interview.