UK has become a preferred choice of international students because of its successful Vaccination Scheme, a Research Indicates 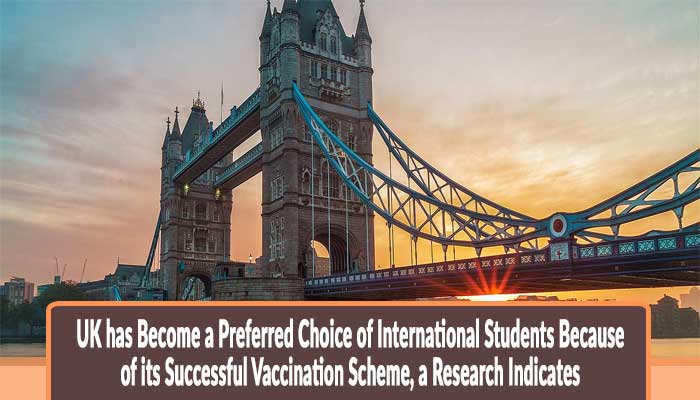 The vaccination rollout in United Kingdoms has been quite a success and so far around 33 million citizens of UK have been vaccinated. A research by QS World University Ranking indicates that because of the success of the vaccine rollout in UK, international students are more likely to enroll at British Universities. In January 2021, the UK had a record number of Covid-19 patients, However due to the extremely well planned vaccination scheme and immediate implement of strict lockdown the number of Covid-19 cases in the country have sharply declined since then. International students are in praise how UK has handled this dreadful pandemic.

Almost 105,083 prospective international students participated in this survey. Nearly 47% of the students said that because of the country’s vaccination rate, they would be more likely to opt to study in UK, whereas 17% of the students taking part in this research had claimed that they were actually very satisfied with how well UK has been handling this situation and how effectively the government has distributed the vaccine to its citizens. According to these students the vaccination plan of UK is better put together and successful than other countries like Canada, USA, Australia and Germany, making UK a preferred study abroad destination among international students than these four countries.

“Education is one of the UK’s greatest exports, and it’s therefore extremely encouraging to see that the successful vaccination rollout is having a positive impact on student perceptions. The sector must capitalize on this as a key opportunity to help expand international student recruitment and strengthen the UK’s position as a global study destination.” said Paul Reybould.

The report also suggested that, “The effectiveness and speed of the rollout is making the UK seem a more attractive and viable destination to begin their studies in September compared to some other countries.”

Almost 68 percent of students said they would take vaccines if they were offered. Approximately 58 percent of students who participated in the survey said that the UK is becoming much more welcoming to international students, which is higher than key competitors including Germany, Canada, Australia and the US.

In the report, Author Nick Hillman said that, “One stand-out finding is the huge importance international students place on access to careers support. It is an enormous step to travel to another country to study, but people do it often in order to help them secure a fulfilling career afterwards. We must do all we can to help them achieve that ambition.”

“Whilst the sector has remained resilient over the course of a difficult year, to help the UK maintain its position as a global study destination it is vital that the concerns and priorities of international students help to guide the sector as we continue to navigate the challenges of both COVID-19 and Brexit.” Said Vivienne Stern, Director of Universities UK International (UUKi).

Despite the fact that many foreign students are keen to study in the UK until the situation improves. Some students are convinced that the United Kingdom did not react effectively to the crisis. Far more precautions should have been taken to deal with the new Covid-19 Variant .According to the QS survey, almost 45 percent of students believe this because of global coverage of the UK's high death toll.