Australia Limits The Arrival Of International Students For 2021 Study Session 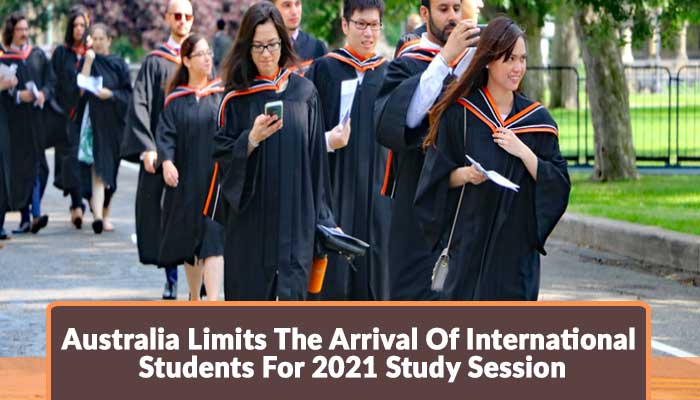 The Federal government of Australia remains the education sector limbo by limiting the international students’ arrival to Australia for the 2021 study session. This shocking announcement was the result of an emergency National Cabinet Meeting held between federal and state governments. The purpose of the meeting is to deal with the crisis of the Covid-19. The meeting has changed the thoughts of several states that had been previously considered as the most welcoming destinations for international students.

Last year it was decided by the government of New South Wales that they would start returning 1,000 students to Sydney each week. However, Gladys Berejiklian, premier of New South Wales put them on the waiting list because of the increasing number of Covid-19 cases in the state.

Victoria State welcomes almost 100,000 candidates from all over the world each year. But it is coming to see that the state has also failed in finalizing a plan to bringing back international candidates in Semester One. Moreover, a pilot flight aimed at bringing 300 international students to Australia has also been delayed because of some genuine reasons including local outbreaks, and public & political pressure.

Only one pilot flight for study in Australia was completed before Christmas when Charles Darwin University successfully received a small group of 63 students. The flight has arrived at the end of November and the candidates managed the quarantine privately to comply with the health requirements issued by federal and state governments.

Almost all the international students who are still interested to start their higher education from Australian universities are asking for the indicative date that when they will be allowed to restart their study applications? Well, the chief executive officer of IEAA, Phil Honeywood said that this given announcement will also severely test the loyalty of students to Australia.

He also described that the situation is unconscionable. He further said that IEAA will continue flinging the federal government and also penning a letter to Scott Morison, the Prime Minister about the situation. Honeywood also stated that the IEAA will come to an indicative date that when the industry will restart. He expected that the situation will be normal until the mid of January because the vaccination program in Australia is in line and it will be commenced in late February.

Is It Safe To Start Study Applications To Australia?

Obviously, after hearing the announcement every student is thinking whether it would be a good option for him or her to start applications for study in Australia or not. Well, no doubt the announcement is shocking but the remarks of Honeywood are, somehow, bringing under consolation that after commencing the vaccination program the industry or the education sector will resume. So, students are advised not to lose hope. However, those students who are under the ambiguity that what study program they have to choose and what institute they have to choose, are recommended to submit an assessment form based on which you will be notified that how to choose the right option for you.