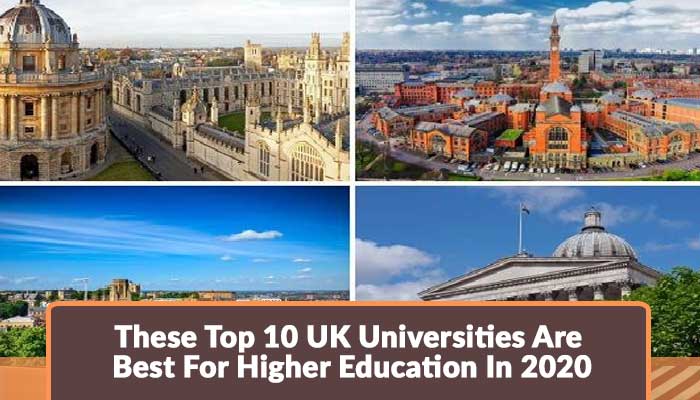 Study in the UK is a dream of thousands of international students. The UK offers quality higher education and this is the reason that today the UK is listed among the top 10 worlds’ study abroad destinations. Local as well as international students can find a variety of study programs from a large number of public as well as private sector universities. Because of a large number of faculties and quality education, UK universities are listed among the top-ranked universities worldwide and the following are the top 10 universities in the UK.

According to the latest report, Cambridge occupies the first rank amongst the Top UK universities and occupies 7th position in the QS worlds’ universities ranking. It is one of the oldest public research university that was established in 1902. The university is offering both undergraduate as well as postgraduate programs. You can find a variety of study programs including engineering, computer science, architecture, economics, and many others.

The University of Oxford stands at 2nd position among the top 10 universities of the United Kingdom and according to the latest report, Oxford occupies 4th position among the top 10 global universities with QS ranking. The university was established in 1096 and is known as the oldest university in the UK. The university is best for both levels i.e. undergraduate level of education as well as the graduate level of education. The university offers a variety of faculties in which science, arts, commerce, history, engineering, law, computer science, literary studies, and many others are included.

Imperial College London was established in 1907. The college occupies 5th position in the top UK institutes and according to the QS ranking, the college stands at the 9th position among the top 10 institutes of the world. The college is offering multiple faculties in which engineering, computer, medicine, and electrical studies are the most prominent programs. Every year thousands of national as well as international students get enrolled for undergraduate as well as postgraduate study programs in Imperial College London.

If you are interested in exploring the unique architecture of the UK and, at the same time, are looking for the quality higher education in the UK then Durham University is another good option for you. Moreover, Durham University is listed under the top 10 UK universities and occupies 78th positions among the QS worlds’ top universities. It is a public sector university that offered a large number of notable alumni in which sports and media personalities are included.

The University College London was first established in 1826. The institute stands at the 8th position among the top colleges in the UK however QS ranking offers 10th position to this institute. The institute is best in offering quality higher education. If you are interested to start your higher education in life sciences and medical sciences then this university is the best option for you. However, the institute is also best in offering the faculties of population health sciences, engineering sciences, law studies, brain sciences, art & humanities, and some others.

Now in the 10th position, we come with the University Of Warwick. With the government initiative to expand the higher education in the country, the University of Warwick was established in 1965. This is a public research university. The university is offering a variety of study programs at both the undergraduate as well as the graduate level of education. Under the QS ranking, the university holds 62nd position globally.

Studyabroad.pk invites all the interested candidates to assess their application through the UK's best’study abroad consultants and get the potential destination of their dreams of study in the UK.