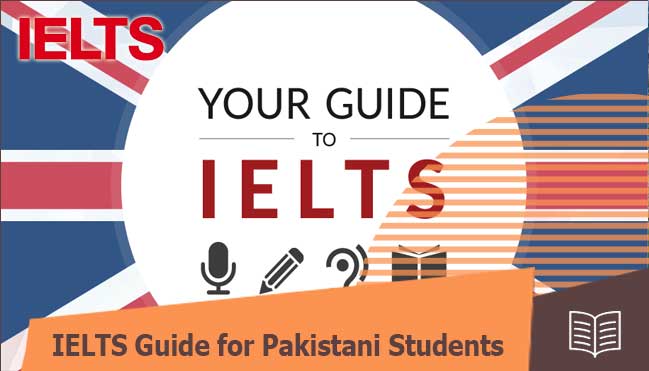 IELTS is an acronym for the international language testing system. The main purpose of IELTS is to design an English language profile of a Pakistani student who is an applicant at any foreign university where the language of teaching is English.

IELTS recognized by the universities of countries like Australia, Canada, United Kingdom, Singapore, Ireland, New Zealand, Germany, other European countries and United States of America. Almost about 1.4 million people take up the IELTS test each year.

From 1989, IELTS was recognized as an authentic and client-oriented test which enables its candidates to communicate well in English. After forty years of research, in partnership with IELTS Australia and Cambridge ESOL, the British Council developed IELTS.

IELTS has been made a benchmark for eligibility not just for admission but also, for obtaining almost all scholarships provided by best universities abroad.

It has four modules, listening, reading, writing and speaking that helps students overcome the language constraints in whatever country they opt to study.

IELTS is conducted at test centers all across the globe. There are presently 500 centers that are functional in over 120 countries.

The IELTS test is generally of two types academic and general.

IELTS Academic Test in Pakistan:  the academic test of IELTS is for the Pakistani students who wants to apply for the admission in countries that have English speaking environment.

The test provides a general analysis of the assessment of whether a student from Pakistan will be able to able to study and cope with English as the only language of communication.

IELTS General test in Pakistan: It’s generally for those who want to go abroad for the continuation of secondary education, obtain work experience, training purposes. The general test is also a pre requisite for immigration to the English speaking countries.

In academic IELTS the writing is more centered on university related conversations, which includes description of an image in detail.

In general IELTS it’s mainly letter writing, rest all remaining the same in the two.

Difficulty level in reading comprehension passages and essays in less in General category.

IELTS test service is provided by both British council and AEO for the convenience of the student. The format procedures and test pattern including online IELTS registration process are similar just the only difference is in IELTS test locations in Pakistanm and examination dates of IELTS test in Pakistan.

AEO test dates in Pakistan are available throughout the year at its 5 different test locations in Islamabad, Lahore, Karachi, Jhelum, and Multan. AEO notifies all details (test venue, time and speaking test date) through SMS and test results are posted online on the 13th day after the test.

The Pakistani student can apply for IELTS test for any of the two since both provide equal opportunities.

Due to large number and huge popularity of IELTS, both AEO and British council provide the test that are pretty much similar. Other English proficiency test are also organized by different organizations for admission and visa requirements.

IELTS Computer Based VS Paper Based:

The IELTS exam is provided in both forms paper based and computer based depending upon the choice of Pakistani student.

The Pakistani student requires to mention the same in their  IELTS application form.

The IELTS coaching centers provide a definite set up for the IELTS computer based practice and provide review for the same.

The detailed list of the test center is being provided.

IELTS is unlike any other English proficiency test, because of large number of applicants not only from Pakistan but everywhere, the standard of the exam has been maintained quiet high.

Large number of universities have a reliance on the IELTS test scores for the admission of international students. The score is between 1 and 9. The score can be a fraction like 6.5. Universities generally demand a score of 6 or 7 for admissions or as low as 4 in order to be eligible.  Therefore a Pakistani student must take all precautions earlier, start preparing beforehand or even opt for enrollment in the IELTS coaching centers.

Therefore preparing for IELTS must be main focus of Pakistani student.

There are two organizations available in Pakistan that take IELTS test.

How many types of IELTS?

There are two types of IELTS Test:

What is the passing score of IELTS?

Nothing is difficult the only thing is well prepration, and remember there is no pass and fail in IELTS

Can candidate ask for the repeatition of question?

There is limit the examiner will repeat only once and then he will not.

How can anyone prepare for ielts at home?

For how many times IELTS can be taken ?

There is not limit of attempts.

How long it take to prepare IELTS?

It varies on you, but you should take 2 to 3 months atleast for prepration